The state in which a person, for a sustained period, is unable to eat sufficient food to meet basic nutritional needs.

Nearly 870 million people live with hunger on a daily basis – that is about 1 in every 8 people. This is both a global and domestic concern. These people suffer from lack of both quality and quantity of food. Of those nearly 870 million hungry people, approximately 850 million are in developing countries while the remainder live in developed countries like the United States. 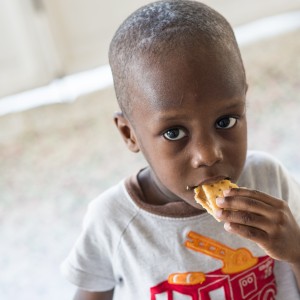 Malnutrition stunts the growth of nearly 1/3 of children in developing countries.

This is most prevalent in Africa, Asia, Latin America, and the Caribbean. Stunting is not the only side-effect of poor nutrition. There are many other short and long term effects as well. Cognitive development can be impaired, leading to learning disabilities and reduced language development. Nutrient deficiency has many other implications such as compromised immune system, organ failure, gastrointestinal infections, and long-term illness.

Poorly nourished children can be ill up to half the year! Illness is only made worse by lack of proper/enough nutrition, which can lead to death. Malnutrition is the largest contributor to child mortality with at least half of childhood deaths being attributed to poor nutrition.

Many children start life malnourished in the womb. When a pregnant mother is not receiving enough proper nutrition, this passes on to the baby. A child born malnourished is at higher risk for long-term illness, organ dysfunction, and impaired brain development.

THE STATE OF BEING WITHOUT RELIABLE ACCESS TO A SUFFICIENT QUANTITY OF AFFORDABLE, NUTRITIOUS FOOD

Food insecurity is a complex issue, with many causes. Poverty, however, is the main cause of hunger. Even more devastating is that the world produces more than enough food to feed everyone. Lack of technology, low water supply, poor sanitation, problems with food distribution, high food prices, and conflict are other main reasons for lack of sufficient food and nutrients.